Skip to Navigation Skip to Content
Back to Impact Stories
Posted on Mar 3, 2016, 2:22 PM
Community Stories 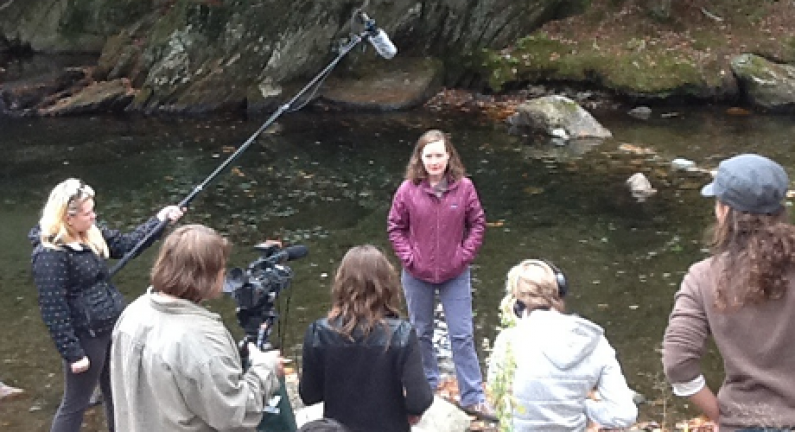 The first face you see in the documentary is not one you would expect. After the title screen for “The Mad River: It’s Our River and Yours,” fades, the camera focuses in on its first interviewee, seated in a low red chair next to a whiteboard, hair tucked back by a small, pink barrette. The young Waitsfield Elementary School student’s eyes flicker around the room as she explains that the Mad River is “mad,” not because of heavy currents, but because it flows north instead of south, as few other rivers do.

The girl is one of many local students making an appearance in the thirty-minute film produced by Mad River Valley Television. Throughout, her classmates offer everything from their memories of summertime romps in the river, to their thoughts on erosion and an invasive species of algae known as “rock snot.”

The faces on the other side of the camera might also come as a surprise. The eyes gazing into the viewfinder do not belong to a member of a professional film crew, but instead to a student from Harwood High School’s alternative ninth grade class, Harwood Unlimited Beginnings (HUB). Next to the young cameraman stands a fellow HUB classmate, prompting the young interviewee with clarifying questions.

When Mad River Valley Television (MRVTV) received a Small and Inspiring grant in 2014 to make the film, they did not expect this level of engagement from area students. While their goal from the very beginning was to create a documentary that fostered stewardship and community responsibility for the river, MRVTV initially planned to enlist the help of older interns to carry out research and interviews. When they were unable to find suitable interns, however, MRVTV turned to the high school’s HUB class as an alternative. What they found there was an opportunity to develop learning and community beyond what they had planned for in their original grant application.

In producing the documentary, the HUB students not only learned practical skills in media creation, but they also built connections in their community, an awareness of their natural environment, and an understanding of the interplay between the two. In essence, what was already a great Small and Inspiring project became an even better one, bringing these students into contact with their neighbors—both young and old—and their natural surroundings in a productive and creative way. Perhaps most importantly, the students learned the value of sharing their learning with others.

The multi-generational focus of the documentary reflects the scope of this shared learning. Indeed, it was the HUB students that drove the inclusion of so many student perspectives in the final product.

“The [HUB] students ultimately gravitated toward interviewing elementary and high school students to capture their thoughts about the Mad River,” said Alex Maclay, Executive Director of MRVTV. “This was perhaps the most meaningful part of the project, as students began to understand how their influence, collectively, could positively impact a younger generation.”

If you watch the documentary, you can see the impact in action. While adult experts, volunteers, and community members appear in the film to discuss the river’s past and present, the young interviewees’ voices—and the young film-makers’ vision—promise a bright future for the Mad River and its surrounding communities.