Skip to Navigation Skip to Content
Back to Impact Stories
Posted on Apr 12, 2021, 8:22 AM
Community Stories

What is a giving circle? A Q+A with The Giving Project 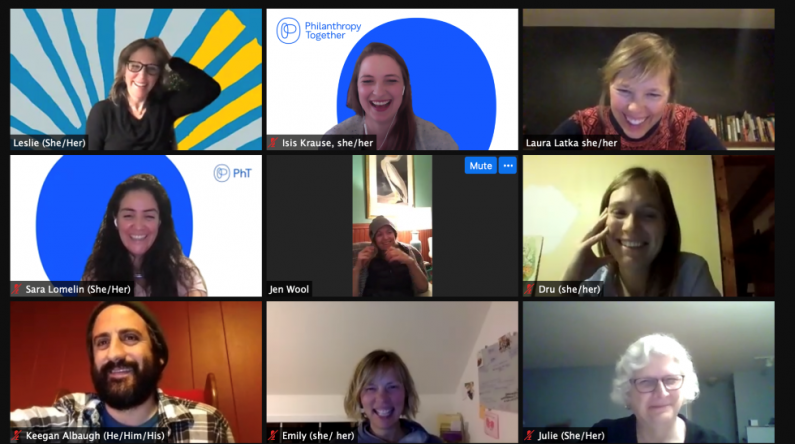 This Q+A was authored by Leslie Halperin and Laura Latka, co-founders of The Giving Project, which provides free training to giving circles’ leaders and members.

What is a giving circle?

Giving circles are groups of individuals that come together to pool their dollars, explore issues they care about, and collectively decide where to donate their money for greater impact.

Giving circles come in all shapes and sizes: some are run as collectives; others are more hierarchical. Some give monthly; some give just once a year. Some are formal and require staff to manage operations; others operate in a more informal way with members taking turns doing different tasks, such as contacting nonprofits and setting meeting dates. Some attract members based on affinity or interest; others are composed of neighbors, friends, or co-workers.

We believe that giving circles provide a way for anyone and everyone to lift up the causes they care about and support the change they wish to see in the world. We are grateful for the Vermont Community Foundation’s sponsorship of The Giving Project, which helps us provide free training to giving circles’ leaders and members!

“Giving circles are a great entry point to explore philanthropic giving with the added benefit of building community at the same time,” says Dan Smith, President and CEO of the Vermont Community Foundation. “We’re excited to support The Giving Project as they work to expand the footprint of charitable giving throughout the state, which directly supports our mission of bringing together people and resources to make a difference in Vermont.”

Why join a giving circle?

Often people don’t give because they feel their contribution won’t matter. When you give collectively, you know your contribution is part of a larger gift and can appreciate the more significant impact. When Laura Latka, co-founder of The Giving Project was planning for her giving circle, Si Se Puede, she wanted to make sure that it was welcoming to folks from all socioeconomic backgrounds and set the giving level at $5. “Whether you give $5 or $5,000, you have equal power, you get one vote and participate equally in the vetting process. The idea is that together we can achieve more than we can on our own."

Giving circles also help everyday donors connect to causes, movements, and people outside of the nonprofit sector, including individuals, activists, and grassroots coalitions. Since most giving circles don’t have to abide by the same rules a larger foundation might, they can direct funds to individuals, grassroots organizers, mutual aid groups, or families in need. In the Fall, our pop-up Giving circle chose to support a BIPOC, youth-led group called Winooski Students for Anti Racism (WSA). The $1,000 that was raised was the first donation WSA received from individual donors and helped the group with subsequent fundraising.

What is the giving circle scene in Vermont?

Within the Vermont Community Foundation, there are examples of giving circles where grant decisions are made by a committee of volunteers:

Outside of the Community Foundation, there are diverse and varied giving circles throughout the state. Some coalesce around a shared identity (such as race, religion, or ethnicity), or an issue or cause (six giving circles in our network focus on racial or social justice issues). Others bring together groups of friends, neighbors, or colleagues. Some, like the Women in Fundraising giving circle, have a dual mission of collective impact giving and professional development for women working in fundraising positions in Vermont.

Giving circles also vary in where they direct funds. Some giving circles, like the Athena Giving Circle in Brattleboro, are hyperlocal in their giving focus and others give statewide, nationally or internationally, like The Vermont Women's Giving Circle, a group that has been giving collectively to support international work in human rights, education, and health and safety since 2011.

Seventeen-year-old Lena Kerest, founder of the Good Trouble Giving Circle, is the youngest person to complete our leadership training program, Launchpad Vermont. She is the inspiration for Launchpad NextGen, a giving circle leader training program for youth that we plan to pilot this spring.

What type of giving circle you start or join depends on the experience you are after, as each group creates its own culture and values. If you want help finding a giving circle that is a good match for you, contact The Giving Project! We can help!

How can I engage in Giving circles right now?

If you are thinking about starting a Giving circle, sign up for Launchpad, an interactive virtual leadership program for anyone who wants to start a new Giving circle. Applications for the May Launchpad NextGen for Vermont youth ages 15 - 18 are due on April 27th. Thanks to a sponsorship from the Vermont Community Foundation and other funders, trainings are free.

JOIN A GIVING CIRCLE and CONNECT WITH THE GIVING PROJECT

If you want help finding a giving circle that is right for you, The Giving Project can help. Contact us.