Bill Post loves what he does. And he’s been doing it for almost 40 years. Interestingly, his path to becoming an attorney at Gravel & Shea in Burlington was one of happenstance. 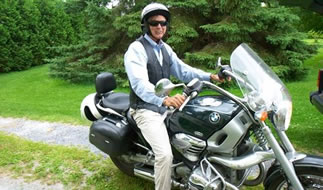 Bill and his wife knew that the city life wasn’t for them, so in 1974 they relocated to Vermont from New York City, where he was a young associate in the estate planning department at a mid-size law firm. When they arrived Bill didn’t have a job, but had the good fortune of meeting Charlie Shea through a friend.

At that time in Vermont there weren’t many attorneys in the estate planning field, so Charlie recognized the opportunity sitting in front of him.

Bill now advises the second and even third generation of some of the families he met in the 1970s. For him, the long-term friendships that form are the most fulfilling aspect of his work. He also loves developing creative charitable giving solutions for his clients. When the Community Foundation’s founding president Dave Rahr knocked on Bill’s door back in 1986 looking for some help in getting the organization off the ground, he was not just happy to help—he was excited. It was another case of serendipity in Bill’s life, because starting a community foundation was an idea he had been ruminating on.

Over the past 26 years Bill has worked with many of his clients to create both large supporting organizations, as well as smaller advised funds at the Community Foundation. And Bill himself has a fund that was established in memory of his son Paul to support reading and other enrichment programs in Vermont libraries. Says Bill, “Without the fund, I wouldn’t have the opportunity to make grants that honor my son in such a meaningful way.”