Skip to Navigation Skip to Content
Back to Impact Stories
Posted on Nov 22, 2016, 9:50 AM
People & Profiles

A Love of the Kingdom: Richard and Kathy White 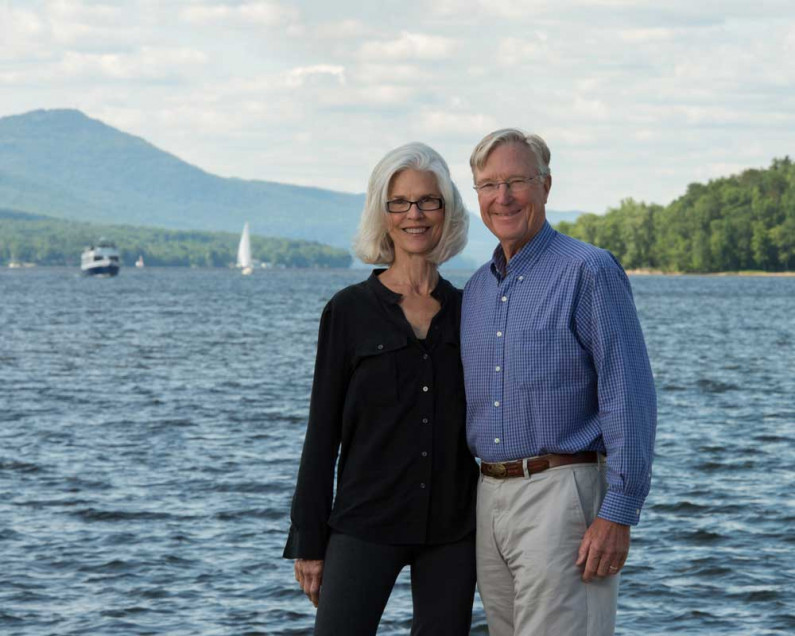 When Richard White was a young lawyer just starting in Burlington, the judge he clerked for, Albert W. Coffrin, gave him some life-changing advice: to make a bigger impact faster, he should move to a smaller community. Following this advice, Richard and his wife Kathy landed in the Northeast Kingdom—and they could not have made a better decision.

“I joined a law firm whose partners were all active in the community in various ways, and this gave me a good start not only in my practice but in community involvement,” says Richard.

Richard and Kathy fell in love with the beauty of the Kingdom, and soon after they arrived, they began to understand and appreciate the tremendous strength of its people. Richard worked first as a lawyer and then became President of Community National Bank in Derby, and Kathy worked in education as a high school English teacher, Chair of the Governor’s Institutes of Vermont, and a board member of Vermont State Colleges. They both were active participants in the community—giving back by joining various nonprofit boards, volunteering, and making gifts. One of Richard’s main interests was affordable housing, and he served for ten years as President of a local nonprofit housing developer and also as chair of the Vermont Housing Finance Agency.

The Whites grew their philanthropy with a focus on giving locally. “After a few years, we realized it made sense on several levels to prioritize our giving, so we developed a budget for this purpose which has evolved over the years,” Kathy said. In 1998, they started a fund in their names at the Community Foundation dedicated to strengthening nonprofit organizations in the Kingdom. Among the many programs they supported over the years was a summer mountain biking camp called Dirt Divas. The program, created by Nadine Budbill of Wolcott and now with Vermont Works for Women, truly captured the intersection between the Whites’ love of the land and their determination to help middle school-aged girls in the Kingdom. Another favorite program of theirs was the North Country Dance Company at the local high school, which they have supported regularly over the years.

Their fund was a start, but the Whites wanted to make a bigger, longer-term difference for the place they loved. When Richard was board chair of the Community Foundation from 2002 to 2004, he and Kathy started talking about the possibility of a regional fund that could serve as a dedicated resource for the Kingdom for years to come. Launched in 2011 through the efforts of the Community Foundation and a local steering committee, the Northeast Kingdom Fund supports innovative projects in the Kingdom, enlivening and enriching its communities.

Though Richard and Kathy no longer live in the Kingdom full time, they care deeply about the region and still maintain a condo overlooking Lake Memphremagog. They return regularly, and their connection is always present thanks to the Northeast Kingdom Fund.

Since 2012, the Northeast Kingdom Fund has awarded more than100 grants totaling more than $300,000 to organizations serving the people of Orleans, Essex, and Caledonia Counties. You can read about the projects funded in 2016 here.

“We are so pleased that the Northeast Kingdom Fund is up and running,” says Kathy. “It is gratifying to see it gain traction in the Kingdom. One of the things we’ve learned over the years is that even relatively small donations can be very helpful to both start-up and established nonprofits. So we are delighted to have included the Northeast Kingdom fund in our planned giving. We hope that others might, too."