Skip to Navigation Skip to Content
Back to Impact Stories
Posted by Zoe Pike on Dec 11, 2018, 4:37 PM
People & Profiles 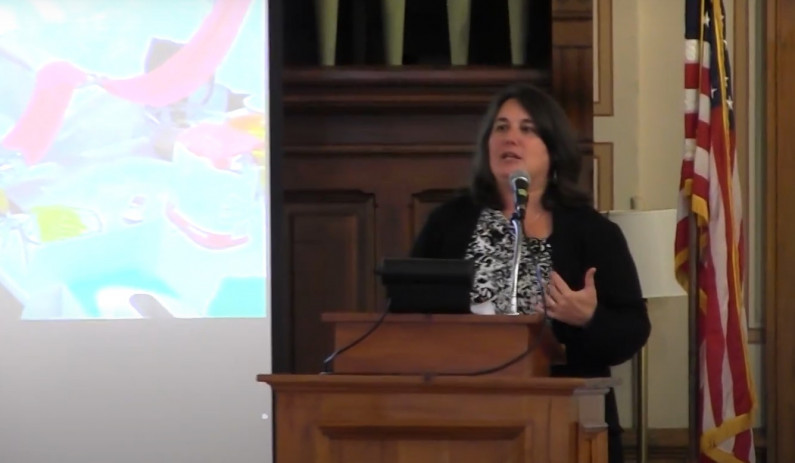 James Baker was honored with this year’s $15,000 Con Hogan award. The annual award recognizes Con’s life work by rewarding each year a community leader who shares his vision of a better Vermont and who seizes the responsibility for making that vision a reality. The award, to be used however the recipient chooses, is given to a leader who shows deep community involvement, generosity, enthusiasm, a collaborative approach, and a focus on data and outcomes in his or her work.

Baker is the former Police Chief in Rutland and current leader of a community revitalization effort in Arlington, where he lives.

Holly Morehouse, the Executive Director of Vermont Afterschool, Inc., was the 2017 recipient and used the award to visit Finland last spring, exploring how children and youth use their third space—the time after home and school where children spend the bulk of their time.

Both Baker and Morehouse spoke about their lives and work at the 2018 award celebration in October at the Vermont College of Fine Arts in Montpelier. Videos of their remarks are available here.

In accepting the 2018 award, Baker spoke about growing up in Hoosick Falls, NY and about his work at the Vermont State Police and as Chief of Police in Rutland. “What I found in Rutland was a community ravaged by the opiate crisis,” he said referring to the beginning of his tenure as chief in January 2012. “Crime in the form or property crimes, domestic violence, and disorderly acts led to a community feeling unsafe and anxious.”

Baker has spent much of his career tackling difficult challenges head on.  After retiring as a Colonel from the Vermont State Police and serving as its Director from 2006-2009, Baker was named Interim Director of the Vermont Police Academy and successfully worked to restore stability and respect to the struggling Academy.

And using Con Hogan’s approach to solving tough problems, in Rutland, Baker dug into the data and turned to the community to help him. “We started a round table of community leaders, stakeholders and organizational leaders to marshal resources,” Baker said. “We did not always get it right, but we began to address root causes and change the narrative.” Other communities in Vermont are looking to learn from Rutland’s successes.

Morehouse said that the award she received in 2017 allowed her to spend three weeks in Finland last spring to explore and learn. Morehouse remarked, “With some of the highest test scores in the world and the shortest school days, the question I had was what was happening in the third space in Finland that was allowing children and youth to be so successful there.” She spoke about how what she learned in Finland is stimulating action for children and youth in Vermont.

Morehouse emphasized that the award she received last year has made a big difference for her work and her life. “The work we’re doing for the children and youth in Vermont has taken a huge leap forward¬—three to five years’ worth of work in 12 months—because of the association with this award,” she said.

For more information about the award, please visit vermontcf.org/conhoganaward.